FirstGroup and Trenitalia jointly own Avanti West Coast, replacing Virgin Trains as operators of the West Coast franchise in December 2019.

Avanti's Pendolino trains are faster and have big, comfy seats. The franchise operates all over the country, calling at 46 major UK stations, including Birmingham New Street and Manchester Piccadilly. They have 76 trains in total.

If you’re not sure where to travel with Avanti West Coast, look at our map. From London Euston, you can go as far North as Glasgow Central and Edinburgh Waverley.

Avanti West Coast operates high-speed trains, mainly running between intercity stations. This means they are an excellent option for long-distance travel. For those looking for a holiday in the UK countryside, there are trains to the Lake District, including Penrith North Lakes, Oxenholme Lake District and Carlisle stations. For long weekend breaks, options include Liverpool and Birmingham.

Click on the Image and Zoom In to have a better view... 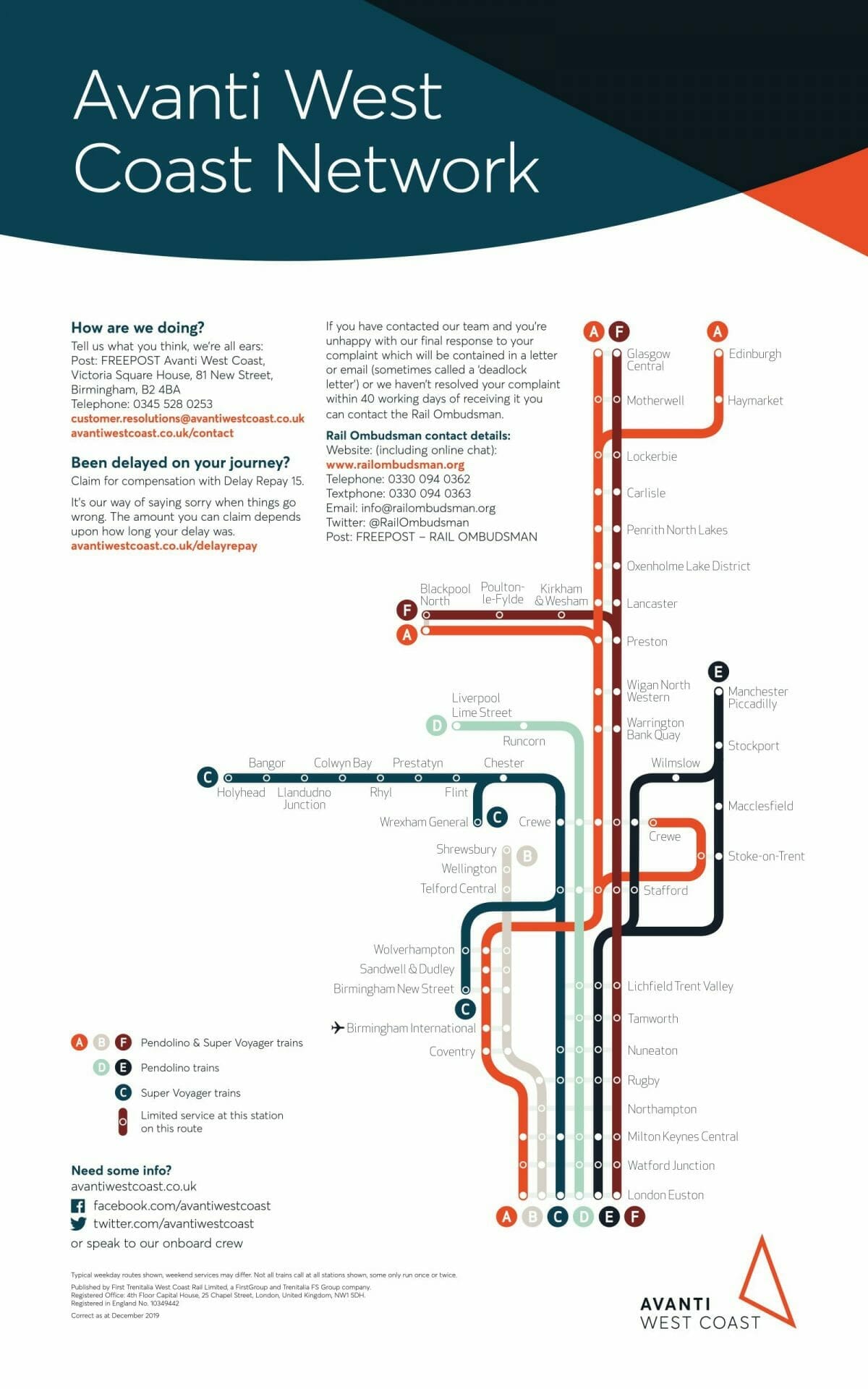 Before you travel, it is worth checking if your train is running on time. Delays can happen due to bad weather or work on the tracks.

To keep track of the status of your Avanti West Coast train, visit their live journey tracker.

For delays of just 15 minutes, you can claim compensation from Avanti West Coast. Full refunds are available if your train is delayed by 2 hours or more. You must claim within 28 days of travel, with compensation available as follows:

Avanti West Coast is jointly owned by FirstGroup (70%) and Trenitalia (30%). The West Coast franchise was previously owned by Virgin Trains.

How fast do Avanti trains go?

Does Avanti trains have WiFi?

WiFi is available on all Avanti trains and is free. Their WiFi is suitable for browsing sites and social media but not for streaming of audio or video.

Do Greater Anglia trains have WiFi?

Most Greater Anglia Trains have free Wifi with a speed of 1.2mb/s and all passengers given a data allowance of 90mb.

Do Avanti trains have a shop?

Every Avanti West Coast train has an on-board shop, with a variety of food, drink and newspapers available.

What are Greater Anglia’s peak hours?

All Avanti West Coast trains have toilets, with access for disabled passengers available.

Are dogs allowed on Avanti trains?

Dogs are allowed on Avanti trains and you can travel with a total of two pets at no extra charge, any additional pet cost £5 to bring.

What is Avanti Media?

Avanti Media offers free movies, tv shows, online newspapers and music while you travel. It is available on all trains when you’re connected to the free WiFi.

How much luggage can I bring?

You can bring two items of hold luggage of a size no bigger than 30X70X90cm, as well as one item of hand luggage. If the train is very busy, you may not fit all your luggage on board.

Save Money on Your Avanti West Coast Train Now

Finding our customers savings on their train tickets is what we do best. Our new website means it’s easier and faster for you to get cheaper split fares.